Too many companies across the globe have been profiting from exploiting people and the planet. Their activities have too often caused or contributed to the erosion of workers’ and trade union rights, forced and child labour, as well as climate breakdown, biodiversity collapse, growing poverty, and the killings of environmental and human rights defenders, including trade unionists.

This is backed up by a range of reports by international human rights monitoring bodies, including the annual ITUC Global Rights Index which shows that violations of trade union and workers’ rights continue to increase. Violations are not only committed by governments but also by well-known multinational companies.

It has led to global efforts to introduce laws to hold business accountable for human rights including labour and environmental rights abuses they cause or contribute to. . Congress has been participating in actions at national, EU and international level to ensure that trade unions, workers’ representatives and workers are able to hold these companies accountable for human rights and environmental abuses in all their operations and throughout their supply chains and this blog is a brief summary of how the land lies.

Warning – this is not a subject area without its own acronyms and legal terms!  The UN Office of the Commissioner for Human Rights has a dedicated page explaining it all in some detail but for the purposes of this blog, let's begin with a brief description of what is meant by Human Rights Due Diligence:

“A human rights due diligence process is one where companies seek to identify, prevent, mitigate and account for how they address their impacts on human rights”.

National Developments
Congress is a founding member of the Irish Coalition on Business and Human Rights (ICBHR) which last October launched a campaign for Corporate Accountability Legislation in Ireland (a form of MHRDD). The report,  ‘Make it Your Business’, demonstrates how Irish business is unwittingly or otherwise implicated in serious violations of human rights, including in the context of fossil fuel extraction and digital tourism. And goes on to make the case for moving beyond voluntary principles to corporate accountability legislation – as has happened in a number of countries - that would include the following elements: 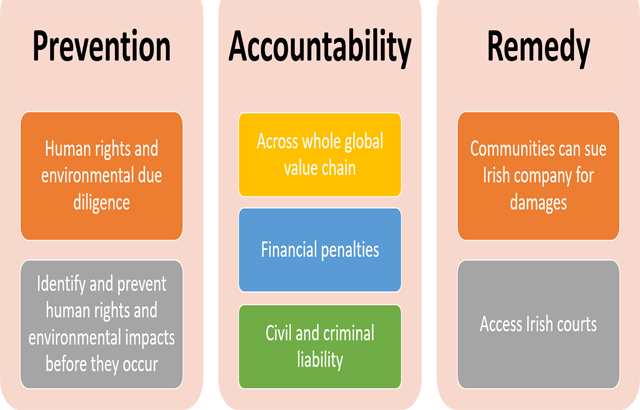 A poll conducted by the ICBHR shows 81% of Irish people want such legally binding regulations in Ireland for Irish companies acting unethically in low-income countries. Only 11% believe Irish companies should be able to self-regulate and apply their own standards.

Congress will continue to work with ICBHR to urge Government to build on limited progress in the national action plan on business and human rights and to build on the commitment in the programme for Government to “review whether there is a need for greater emphasis on mandatory due diligence”.

At EU level, Congress is working closely with the ETUC advocating for a long-awaited EU law on mandatory Human Rights Due Diligence and to ensure full involvement of trade unions in all legislative and policy-design processes at all levels.
We were part of a major campaign to keep pressure on the EU institutions and the ETUC also released a Joint Statement on Sustainable Corporate Governance, as well as launching a countdown “Time to act on Human Rights Due Diligence and responsible business conduct”. A roadmap of actions proposed for 2022 was adopted at their December Executive Council meeting.

The ETUC demands in a nutshell include:

Most of these demands are reflected in the European Parliament report by MEP Lara Wolters (NL, S&D) on corporate due diligence and corporate accountability which was adopted in March 2021 and we will be working to ensure that our MEPs support the inclusion of these measures in any proposal presented by the Commission.

International
At the international level, we are working closely with the International Trade Union Confederation (ITUC) to seek to influence the Inter-Governmental Working Group (IGWG) established to develop a binding international treaty on businesses and human rights.  This includes efforts to call upon our own Government to engage constructively in the negotiations and to urge the European Union to adopt a negotiation mandate in order to fully engage in the Binding Treaty process.

With the COVID-19 pandemic once again exposing the fragility of global supply chains and business models built on non-standard forms of employment and informality, the Binding Treaty represents a unique opportunity to end the impunity for corporate human rights abuses. The treaty, if adopted, would help to hold business accountable for the human rights violations they commit as well as to provide victims with an effective legal remedy.  We will continue to advocate for the following key priorities:

Follow our social media channels to stay in touch on these crucial issues during 2022 and watch this space for further initiatives to strengthen the campaign.