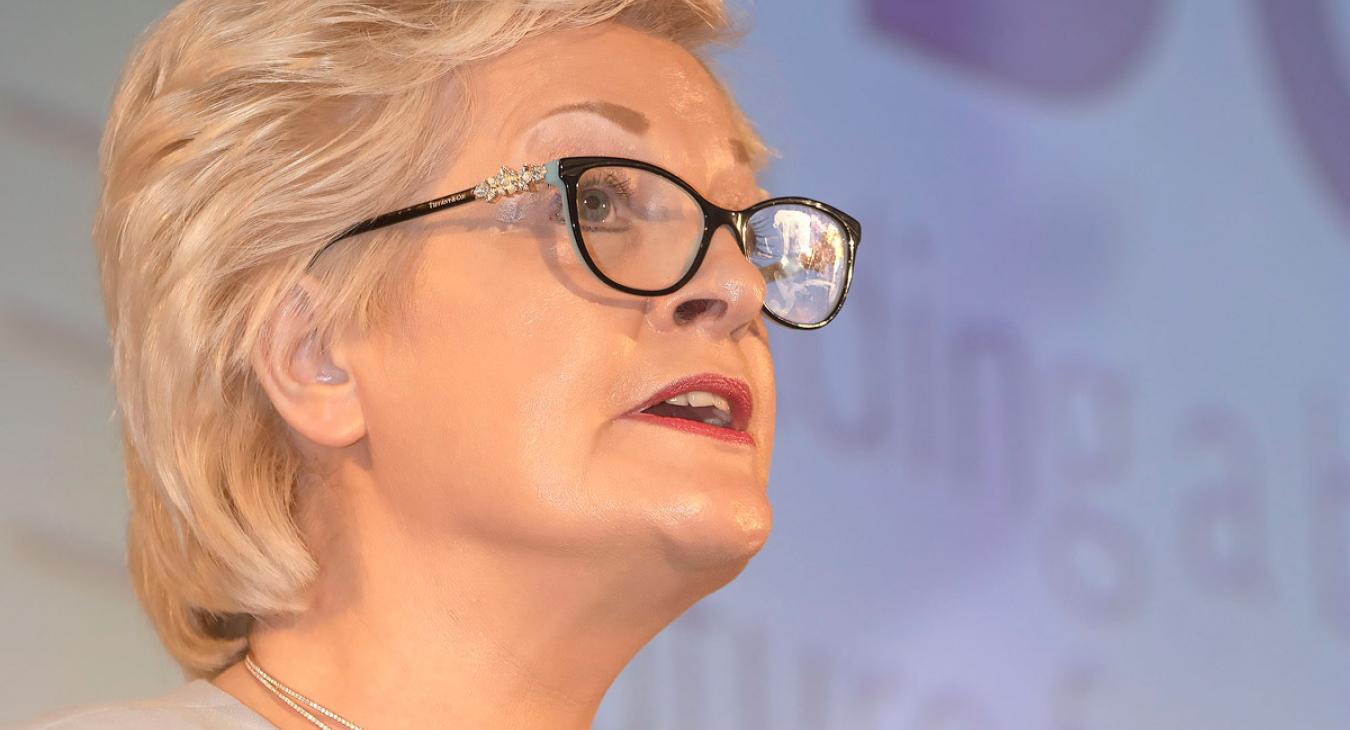 General Secretary of Congress Patricia King has paid tribute to the courage of Dunnes Stores workers at an event to mark the 35th anniversary of their strike, and their extraordinary almost three-year-long fight for impoverished black South African Workers.

In her speech, Patricia King recalled that the workers battle began over the sale of a grapefruit brought to the checkout by a customer.

"When Mary Manning and her colleagues in Dunnes Stores on Henry Street, were issued with a Directive by IDATU not to handle South African goods, they knew very little about the struggle of impoverished black South Africans.

Mary Manning was the first to be tested. When a customer presented at her till with South African sourced grapefruit she explained she was unable to conclude the sale on foot of the Trade Union Directive.  Mary was suspended by management and her shop steward Karen Gearon, immediately initiated a walkout.  They were joined by other young trade union colleagues, Liz Deasy, Michelle Gavin, Sandra Griffin, Theresa Mooney, Vonnie Munroe, Cathryn O"Reilly, Alma Russel and Tommy Davis.

It is probably true to say that on that day in July 1984 none of those workers believed that they had embarked on a particularly lonely road to take on the Irish establishment, make International Labour history, and win".

Patricia King recalled Mary Manning's book, 'striking Back", which tells the story of the three year battle and how they gained  a considerable knowledge of the living conditions for South African black people under the apartheid regime, from Nimrod Sejake who , together with the late Brendan Archibald ,was a regular and welcome picket line supporter who when he  described apartheid ,  held up his hand as if there was a glass in it and said ,  " you have to imagine South Africa as a pint of Guinness- the vast majority of it is black and a tiny minority is white and like a freshly poured pint, the white sits firmly on top of the black".

Patricia King said "it is worth our while reflecting on the particular circumstances the strikers found themselves in.

They had to sustain a daily picket outside that store in the face of bitter recrimination from their employer and indeed colleague workers who didn't join the dispute.

Their income was derived solely from the small weekly, union -strike-pay, which left them unable to meet their normal living expenses including, mortgage payments.

As is normally the case when the initial wave of enthusiasm faded and as negotiations with the Company broke down and the strike remained deadlocked it became clear that this dispute would involve a long haul".

A lonely road for strikers

Patricia King referred to the experiences they endured, "routine harassment by the Gardai, public condemnation by the Catholic Church, (which mattered a bit more then than it does now).  Little if any tangible or worthwhile positive intervention by the trade union movement generally.

The demoralising position eventually  adopted  by the Irish Anti- Apartheid Movement, the unhelpful Labour Court recommendation from the then Chair John Horgan, who proposed "an agreement between the major supermarkets to voluntarily restrict their marketing of South African goods and a code of practice be put in place by the then Department of Labour" and  deliberations of politicians such as this from the then Minister for Industry , Trade , Commerce and Tourism  Mr John Bruton, who pronounced " I have given much thought to this question and I am afraid all my instincts tell me that the Government should not become involved in any activity which is designed to restrict imports from South Africa."

Peter Barry, Minister for Foreign Affairs when he said he was concerned that, the Dunne's dispute was likely to drag on for a long time with losses to both sides. In addition, he said it was attracting a lot of international attention which had "damaging consequences for the country's international reputation"."

How the strike gained international attention

Patricia King pointed out that the South African Government injected some international interest in the dispute when they insisted on deporting the strikers from Johannesburg  Airport. They had arrived eight hours earlier at the invitation of Archbishop Desmond Tutu in order to witness apartheid in operation.  Their subsequent press conference in London was an ideal opportunity to outline the reasons for their actions.  Furthermore, in October 1985 two of the strikers were invited to address the UN's Special Committee against Apartheid.

'this was a long and arduous struggle for these nine women and one man.  They persisted in their action not knowing whether or not they would succeed.

Their profound moral courage was a huge factor in altering Government policy. In 1987 Ireland became the first Western European State to ban South African imports.  They invoked ILO conventions which enabled nation-states to prohibit imports produced using forced labour a policy practised by the apartheid state.  Ireland did not open full diplomatic relations with South Africa until assured of the reality of a transition to democracy.

Despite the fact that it took 33 months for the Irish Government to act both, Desmond Tutu and the late President Nelson Mandela who was in prison at the time understood only too well the depth value and significance of the striker's achievements".

General Secretary of Congress said "I think we can reliably conclude that all the accolades, plaques, street names, songs and memoirs, national and international recognition,  are all very well deserved by this group of workers.  While the dispute is certainly embedded in the history of the Irish labour movement it has probably received more international than national acclaim.  I recall a short anecdote to illustrate this, I know of two senior trade union officials who attended an International Conference in South Africa some years ago. During their stay, they arranged to take a trip to Robben Island to visit the prison where President Mandela was incarcerated. On route, the tour guide, who was a native of Robben Island, drew their attention to a nearby cemetery where many Irish nationals were laid to rest over the years.

He then told the group that of another Irish connection, whereby he recalled that a number of young female shop workers went on strike supporting black majority people of South Africa and won".

Patricia King said 'the two Trade union officials on the bus, John Douglas and Steve Fitzpatrick were astonished because for once, they were unknown to the group and here in Robin Island the story and value of the Dunnes Stores strike was recounted.

The lessons for today and global inequality

But perhaps 35 years on, there is a salutary lesson for this movement.  In an era when we are experiencing a distinctive rise in global inequality, when the world looks on ineffective and impotent at the continued plight and devastation of the Palestinian people, and when we in this 1st world economy rarely if ever consider the plight of 170 million children subjected to child labour, 48% of whom are between the ages of 5 and 11.  Indeed when we take opportunities to turn our backs on migrants seeking sanctuary on our shores we must embrace the persistence demonstrated by the Dunnes Stores strikers and believe that we can effect change, despite the obstacles put in our way, and ultimately such commitment will deliver a difference".

The Dunnes Stores strike began on the 19th of July 1984 and ended 2 years and nine months later in April 1987.